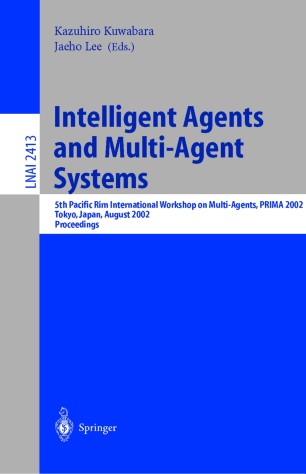 Autonomous agents and multi-agent systems are computational systems in which several (semi-)autonomous agents interact with each other or work together to perform some set of tasks or satisfy some set of goals. These systems may involve computational agents that are homogeneous or heterogeneous, they may involve activities on the part of agents having common or distinct goals, and they may involve participation on the part of humans and intelligent agents. This volume contains selected papers from PRIMA 2002, the 5th Paci?c Rim International Workshop on Multi-Agents, held in Tokyo, Japan, on August 18–19, 2002 in conjunction with the 7th Paci?c Rim International Conference on Arti?cial Intelligence (PRICAI-02). PRIMA is a series of workshops on - tonomous agents and multi-agent systems, integrating activities in the Asian and Paci?c Rim countries. PRIMA 2002 built on the great success of its pre- cessors, PRIMA’98 in Singapore, PRIMA’99 in Kyoto, Japan, PRIMA 2000 in Melbourne, Australia, and PRIMA 2001 in Taipei, Taiwan. We received 35 submissions to this workshop from 10 countries. Each paper was reviewed by three internationally renowned program committee members. After careful reviews, 15 papers were selected for this volume. We would like to thank all the authors who submitted papers to the workshop. We would also like to thank all the program committee members for their splendid work in reviewing the papers. Finally, we thank the editorial sta? of Springer-Verlag for publishing this volume in the Lecture Notes in Arti?cial Intelligence.