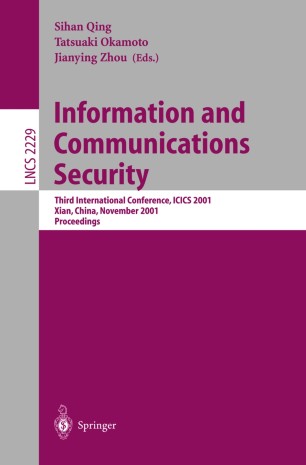 ICICS 2001, the Third International Conference on Information and Commu- cations Security, was held in Xi’an, China, 13-16 November 2001. Among the preceding conferences, ICICS’97 was held in Beijing, China, 11-14 November 1997 and ICICS’99 in Sydney, Australia, 9-11 November 1999. The ICICS’97 and ICICS’99 proceedings were released as volumes 1334 and 1726 of Springer- Verlag’s Lecture Notes in Computer Science series. ICICS 2001 was sponsored by the Chinese Academy of Sciences (CAS), the - tional Natural Science Foundation of China, and the China Computer Fe- ration. The conference was organized by the Engineering Research Center for Information Security Technology of the Chinese Academy of Sciences (ERCIST, CAS) in co-operation with the International Association for Cryptologic Re- arch (IACR), the International Communications and Information Security - sociation (ICISA), and the Asiacrypt Steering Committee. The format of ICICS 2001 was selected to cover the complete spectrum of - formation and communications security, and to promote participant interaction. The sessions were designed to promote interaction between the major topics of the conference: theoretical foundations of security, secret sharing, network - curity, authentication and identi?cation, boolean functions and stream ciphers, security evaluation, signatures, block ciphers and public-key systems, infor- tion hiding, protocols and their analysis, and cryptanalysis. The 29-member Program Committee considered 134 submissions from 23 di- rent countries and regions, among them 56 papers were accepted for presentation.