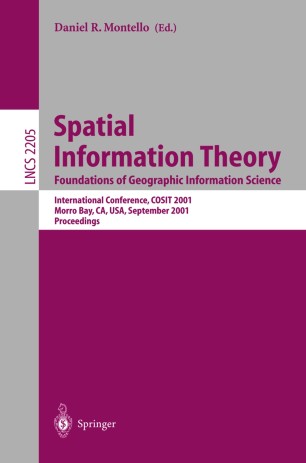 The 5th International Conference on Spatial Information Theory, COSIT 2001, took place at the Inn at Morro Bay, California, USA, September 19 23, 2001. COSIT grew out of a series of workshops/NATO Advanced Study Institutes/NSF Specialist Meetings during the 1990s concerned with theoretical and applied aspects of representing large scale space, particularly geographic or environmental space (this history is elaborated in the prefaces of previous COSIT proceedings). These are spaces in which (and on which) human action takes place, and which are represented and processed in digital geographic information systems. In these early meetings, the need for well founded theories of spatial information representation and processing was identified, particularly theories based on cognition and on computation. This concern for theory provided an early foundation for the newly emerging field of geographic information science. COSIT is not backed by any particular scientific society but is organized as an independent enterprise. The conference series was established in 1993 as an interdisciplinary biennial European conference on the representation and processing of large scale spatial information after a successful international conference on the topic had been organized by Andrew Frank et al. in Pisa in 1992 (frequently referred to as "COSIT 0"). After two successful European COSIT conferences with strong North American participation (COSIT ’93: Island of Elba, Italy; COSIT ’95: Semmering, Austria), COSIT ’97 moved across the pond to the United States, and was held in the Laurel Highlands, Pennsylvania.