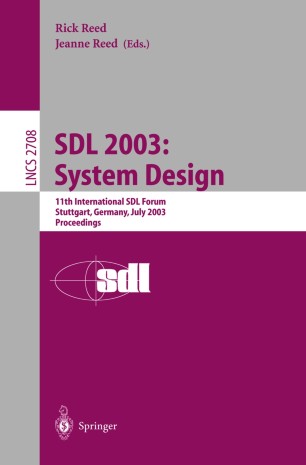 This volume contains the papers presented at the 11th SDL Forum, Stuttgart. As well as the papers, the 11th SDL Forum also hosted a system design competition sponsored by Solinet with a cash prize for the “best” design. This follows a similar competition at the SAM 2002 workshop (papers published in LNCS 2599). The winning entry from SAM 2002 is described in the last paper in this volume. The SDL Forum was ?rst held in 1982, and then every two years from 1985. Initially the Forum was concerned only with the Speci?cation and Descr- tion Language ?rst standardized in the 1976 Orange Book of the International Telecommunication Union (ITU). From the start this graphical CEFSM (communicating extended ?nite state machines) notation was used both to describe the implementation of systems and to specify systems (especially protocol systems in standards). In the early days both types of description were quite informal, though speci?cations were certainly more formal than the main alternative: natural languagewith some ad hoc ?gures. Implementations were usually written in assembly language, which is at too low a level to reason well about the interaction between communic- ing agents within a system. In this case the notation provided an intermediate description that gave an overview of how the implementation worked, and often the actual logical development was done at the graphical level with hand coding of that description.