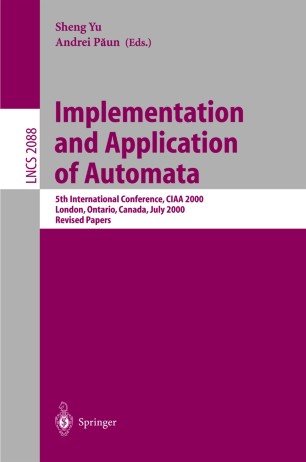 CIAA: International Conference on Implementation and Application of Automata

Implementation and Application of Automata

The Fifth International Conference on Implementation and Application of - tomata (CIAA 2000) was held at the University of Western Ontario in London, Ontario, Canada on July 24-25, 2000. This conference series was formerly called the International Workshop on Implementing Automata (WIA) This volume of the Lecture Notes in Computer Science series contains all the papers that were presented at CIAA 2000, and also the abstracts of the poster papers that were displayed during the conference. The conference addressed issues in automata application and implemen- tion. The topics of the papers presented at this conference ranged from automata applications in software engineering, natural language and speech recognition, and image processing, to new representations and algorithms for e cient imp- mentation of automata and related structures. Automata theory is one of the oldest areas in computer science. Research in automata theory has always been motivated by its applications since its early stages of development. In the 1960s and 1970s, automata research was moti- ted heavily by problems arising from compiler construction, circuit design, string matching, etc. In recent years, many new applications have been found in various areas of computer science as well as in other disciplines. Examples of the new applications include statecharts in object-oriented modeling, nite transducers in natural language processing, and nondeterministic nite-state models in c- munication protocols. Many of the new applications do not and cannot simply apply the existing models and algorithms in automata theory to their problems.