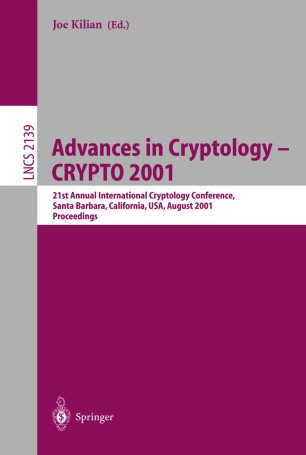 Crypto 2001, the 21st Annual Crypto conference, was sponsored by the Int- national Association for Cryptologic Research (IACR) in cooperation with the IEEE Computer Society Technical Committee on Security and Privacy and the Computer Science Department of the University of California at Santa Barbara. The conference received 156 submissions, of which the program committee selected 34 for presentation; one was later withdrawn. These proceedings contain the revised versions of the 33 submissions that were presented at the conference. These revisions have not been checked for correctness, and the authors bear full responsibility for the contents of their papers. The conference program included two invited lectures. Mark Sherwin spoke on, \Quantum information processing in semiconductors: an experimentalist’s view." Daniel Weitzner spoke on, \Privacy, Authentication & Identity: A recent history of cryptographic struggles for freedom." The conference program also included its perennial \rump session," chaired by Stuart Haber, featuring short, informal talks on late{breaking research news. As I try to account for the hours of my life that ?ew o to oblivion, I realize that most of my time was spent cajoling talented innocents into spending even more time on my behalf. I have accumulated more debts than I can ever hope to repay. As mere statements of thanks are certainly insu cient, consider the rest of this preface my version of Chapter 11.