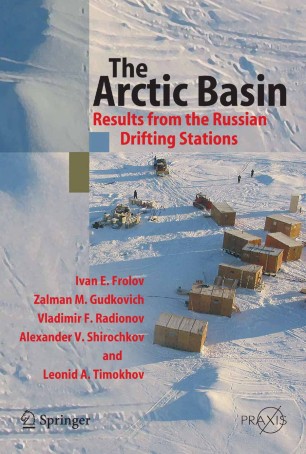 Results from the Russian Drifting Stations

The main scientific results and the analysis of data obtained during metereological, oceanographic, ice and geophysical observations are presented and the book contains illustrations, maps and tables that can be used by a wide range of specialists investigating the nature of the Arctic region.

An analysis of the contribution of the data collected at the drifting stations, the process of envionmental research in the Arctic Basin and the plans for future use of drifting stations is provided, with special emphasis on the forthcoming International Polar Year 2007-2008

"The Arctic Basin aims to provide for the first time a unique and updated insight into the work and achievements of the drifting stations established in the Antartic since 1937. … I do strongly recommend it for any experienced colleague interested in Arctic Ocean science, and for anybody collaborating with Russian colleagues. It provides a valuable common ground for further discussions and future joint projects … . It certainly also contributes to a better understanding between Russian scientists and their international partners." (Christian Haas, Polarforschung, Vol. 75 (1), 2005)