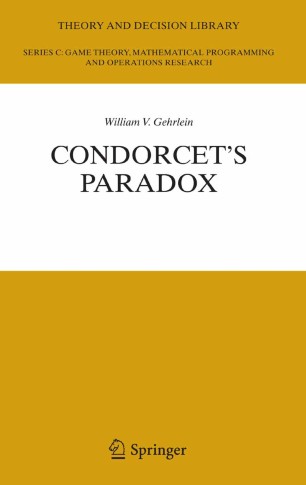 Condorcet’s Paradox has been formally studied by an amazing number of people in many different contexts for more than two centuries. Peter Fishburn introduced the basic notion of the Paradox to me in 1971 during a course in Social Choice Theory at Pennsylvania State University. My immediate response to seeing the simple example that he presented was that this phenomenon certainly could not be very likely to ever be observed in reality. Peter quickly suggested that I should work on developing some representations for the probability that the Paradox might occur, and very soon thereafter that pursuit began. It is only after 35 years of effort, with a lot of help from Peter, that I now feel that a good answer can be given to the challenge that was presented in that classroom in 1971. Many people have suggested to me over the years that a book like this should be completed, since the source material is spread over such a wide variety of disciplines of a- demic journals and books that it is very difficult for people to know what has been done, and has not been done, in this area of determining representations for the probability that Condorcet’s Paradox would ever be observed in reality.