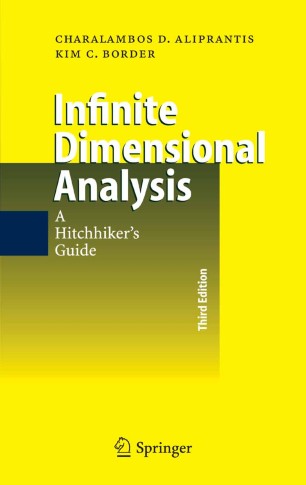 This new edition of The Hitchhiker’s Guide has bene?tted from the comments of many individuals, which have resulted in the addition of some new material, and the reorganization of some of the rest. The most obvious change is the creation of a separate Chapter 7 on convex analysis. Parts of this chapter appeared in elsewhere in the second edition, but much of it is new to the third edition. In particular, there is an expanded discussion of support points of convex sets, and a new section on subgradients of convex functions. There is much more material on the special properties of convex sets and functions in ?nite dimensional spaces. There are improvements and additions in almost every chapter. There is more new material than might seem at ?rst glance, thanks to a change in font that - duced the page count about ?ve percent. We owe a huge debt to Valentina Galvani, Daniela Puzzello, and Francesco Rusticci, who were participants in a graduate seminar at Purdue University and whose suggestions led to many improvements, especially in chapters ?ve through eight. We particularly thank Daniela Puzzello for catching uncountably many errors throughout the second edition, and simplifying the statements of several theorems and proofs. In another graduate seminar at Caltech, many improvements and corrections were suggested by Joel Grus, PJ Healy, Kevin Roust, Maggie Penn, and Bryan Rogers.