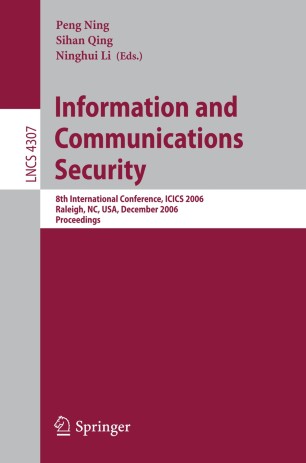 It is our great pleasure to welcome you to the Eighth International Conference on Information and Communications Security (ICICS 2006), held in Raleigh, North Carolina, USA, December 4–7, 2006. The ICICS conference series is an established forum that brings together researchersand scholars involved in m- tiple disciplines of Information and Communications Security in order to foster exchangeof ideas. The past sevenICICS conferences wereheld in Beijing, China (ICICS 1997); Sydney, Australia (ICICS 1999); Xi’an China (ICICS 2001); S- gapore (ICICS 2002); Hohhot City, China (ICICS 2003); Malaga, Spain (ICICS 2004); and Beijing, China (ICICS 2005). The conference proceedings of the past seven events have been published by Springer in the Lecture Notes in Computer Science series, in LNCS1334,LNCS1726,LNCS2229,LNCS 2513,LNCS 2836, LNCS 3269, and LNCS 3783, respectively. This year we received a total of 119 submissions on various aspects of - hoc and sensor network security. The Program Committee selected 22 regular papers and 17 short papers that cover a variety of topics, including security protocols, applied cryptography and cryptanalysis, access control in distributed systems, privacy, malicious code, network and systems security, and security implementations. Putting together ICICS 2006 was a team e?ort. First of all, we would like to thank the authors of every paper, whether accepted or not, for submitting their papers to ICICS 2006. We would like to express our gratitude to the Program Committee members and the external reviewers, who worked very hard in - viewing the papers and providing suggestions for their improvements.