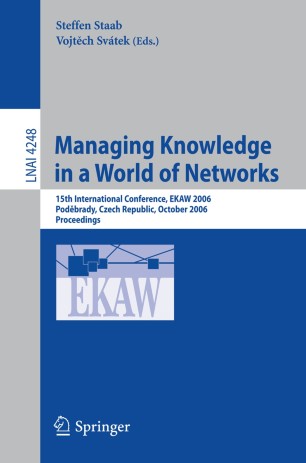 Managing Knowledge in a World of Networks

th The 15 International Conference on Knowledge Engineering and Knowledge Management (2006), held on October 6-10, 2006 in Pod? ebrady,Czech Republic, followed a long tradition of European Knowledge Acquisition Workshops (from 1987),whicheventuallyacquiredtheformatofconference(in2000)whilekeeping their open-minded and interactive spirit. During the nearly 20 year lifespan of the series, the discipline of knowledge engineering (KE) evolved greatly. While knowledge acquisition (KA) techniques dominated in the very ?rst years, formal approaches to knowledge-based inf- ence and variousnew streamssuch as knowledgediscoveryfrom data/textslater cameinto play. During thelate1990sandafterwards,EKAWbecamea founding community for ontology and Semantic Web Research, which was also re?ected in the sub-titles of the 2002 and 2004 editions: “Ontologies and the Semantic Web” and “Engineering Knowledge in the Age of the Semantic Web,” resp- tively. The 2006 edition, in turn, only slightly refocussed this trend. Its sub-title is “Managing Knowledge in a World of Networks,” which re?ects the fact that semantics typically arises not only as a result of explicit engineering activities (as in Semantic Web) but also emerges from interaction of a high number of interconnected documents, ontological concepts, software applications and — especially — human users. The importance given to the interconnection of - man users in a sense loops back to the knowledge acquisition roots of EKAW and its ‘holistic’ view of knowledge engineering.