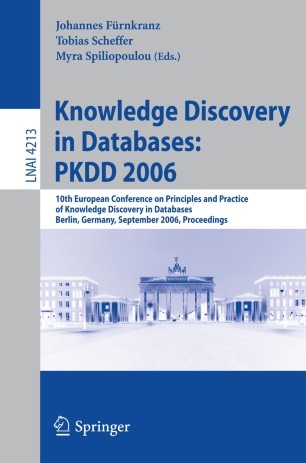 The two premier annual European conferences in the areas of machine learning anddatamining havebeencollocatedeversincethejointconferenceinFreiburg, Germany,2001. The European Conference on Machine Learning wasestablished 20 years ago, when the ?rst European Working Session on Learning was held in Orsay, France, in 1986. The conference is growing, and is more lively than ever. The European Conference on Principles and Practice of Knowledge Discovery in Databasescelebratesits tenth anniversary;the ?rst PKDD took place in 1997 in Trondheim, Norway. Over the years, the ECML/PKDD series has evolved into one of the largest and most selective international conferences in these areas, the only one that provides a common forum for the two closely related ?elds. In 2006, the 6th collocated ECML/PKDD took place during September 18-22, when the Humboldt-Universität zu Berlin hosted the 17th European Conference on Machine Learning (ECML) and the 10th European Conference on Principles and Practice of Knowledge Discovery in Databases (PKDD). The successful model of a hierarchical reviewing process that was introduced last year for the ECML/PKDD 2005 in Porto has been taken over in 2006. We nominated 32 Area Chairs, each of them responsible for several closely related research topics. Suitable areas were selected on the basis of the submission s- tistics for ECML/PKDD 2005 to ensure a proper load balance among the Area Chairs. For the ?rst time, a joint Program Committee was nominated for the two conferences, consisting of 280 renowned researchers,mostly proposed by the AreaChairs.