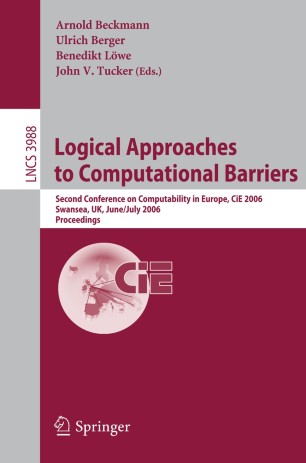 CiE: Conference on Computability in Europe

CiE 2006: Logical Approaches to Computational Barriers Swansea, Wales, June 30 - July 5, 2006 Computability in Europe (CiE) is an informal network of European scientists working on computability theory, including its foundations, technical devel- ment, and applications. Among the aims of the network is to advance our t- oretical understanding of what can and cannot be computed, by any means of computation. Its scienti?c vision is broad: computations may be performed with discrete or continuous data by all kinds of algorithms, programs, and - chines. Computations may be made by experimenting with any sort of physical system obeying the laws of a physical theory such as Newtonian mechanics, quantum theory or relativity. Computations may be very general, depending upon the foundations of set theory; or very speci?c, using the combinatorics of ?nite structures. CiE also works on subjects intimately related to computation, especially theories of data and information, and methods for formal reasoning about computations. The sources of new ideas and methods include practical developments in areas such as neural networks, quantum computation, natural computation, molecular computation, and computational learning. Applications are everywhere, especially, in algebra, analysis and geometry, or data types and programming. This volume, Logical Approaches to Computational Barriers, is the proce- ings of the second in a series of conferences of CiE that was held at the Depa- ment of Computer Science, Swansea University, 30 June - 5 July, 2006.