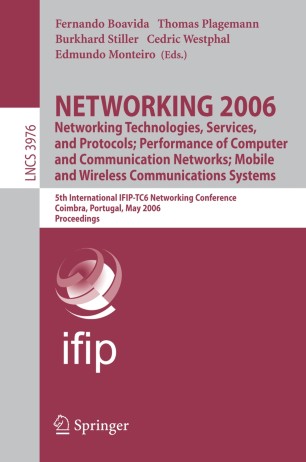 Networking 2006 was organized by the University of Coimbra, Portugal, and it was the fifth event in a series of International Conferences on Networking sponsored by the IFIP Technical Committee on Communication Systems (TC 6). Previous events were held in Paris (France) in 2000, Pisa (Italy) in 2002, Athens (Greece) in 2004, and Waterloo (Canada) in 2005. Networking 2006 brought together active and proficient members of the networking community, from both academia and industry, thus contributing to scientific, strategic, and practical advances in the broad and fast-evolving field of communications. The conference comprised highly technical sessions organized thematically, keynote talks, tutorials offered by experts, as well as workshops and panel discussions on topical themes. Plenary sessions with keynote talks opened the daily sessions, which covered Networking Technologies, Services and Protocols, Performance of Computer and Communication Networks, and Mobile and Wireless Communications Systems. The Networking 2006 call for papers attracted 440 submissions from 44 different countries in Asia, Australia, Europe, North America, and South America. These were subject to thorough review work by the Program Committee members and additional reviewers. The selection process was finalized in a Technical Program Committee meeting held in Lisbon on January 23, 2006.