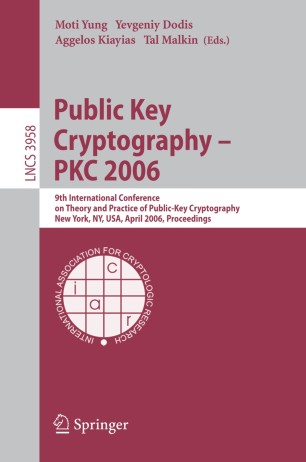 The 9th International Conference on Theory and Practice of Public-Key Cr- tography(PKC 2006) took place in New York City. PKC is the premier inter- tional conference dedicated to cryptology focusing on all aspects of public-key cryptography. The event is sponsored by the International Association of Cr- tologic Research (IACR), and this year it was also sponsored by the Columbia University Computer Science Department as well as a number of sponsors from industry, among them: EADS and Morgan Stanley, which were golden sponsors, as well as Gemplus, NTT DoCoMo, Google, Microsoft and RSA Security, which were silver sponsors. We acknowledge the generous support of our industrial sponsors; their support was a major contributing factor to the success of this year’s PKC. PKC 2006 followed a series of very successful conferences that started in 1998in Yokohama,Japan.Further meetingswereheld successivelyinKamakura (Japan), Melbourne (Australia), Jeju Island (Korea), Paris (France), Miami (USA), Singapore and Les Diablerets (Switzerland). The conference became an IACR sponsored event (o?cially designated as an IACR workshop) in 2003 and has been sponsored by IACR continuously since then. The year 2006 found us all in New York City where the undertone of the conference was hummed in the relentless rhythm of the city that never sleeps.