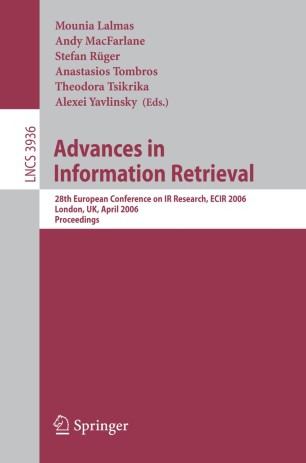 th These proceedings contain the refereed papers and posters presented at the 28 Annual European Conference on Information Retrieval (ECIR 2006), which was held at Imperial College London in South Kensington between April 10 and 12, 2006. ECIR is the annual conference of the British Computer Society’s Inf- mation Retrieval Specialist Group. The event started its life as a colloquium in 1978 and was held in the UK each year until 1998, when the event took place in Grenoble, France. Since then the venue has alternated between the UK and Continental Europe. In the last decade ECIR has grown to become the major Europeanforumforthediscussionofresearchinthe?eldofinformationretrieval. ECIR 2006 received 177 paper and 73 poster submissions, largely from the UK (18%) and Continental Europe (50%), but we had many sub- missions from furthera?eldincludingAmerica(7%),Asia(21%),Middle EastandAfrica(2%), and Australasia (2%). In total 37 papers and 28 posters were accepted, and two papers were converted to posters. All contributions were reviewed by at least three reviewers in a double anonymous process and then ranked during a ProgrammeCommittee meeting with respectto scienti?c quality andoriginality. It is a good and healthy sign for information retrieval in general, and ECIR in particular, that the submission rate has more than doubled over the past three years. The downside, of course, is that many high-quality submissions had to be rejected owing to a limited capacity of the conference.