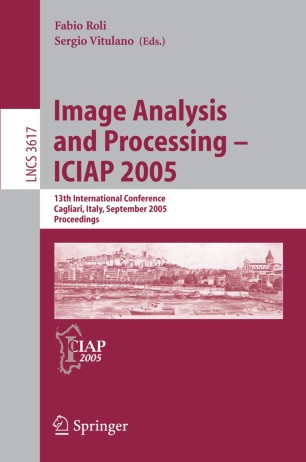 This volume contains the Proceedings of the 13th International Conference on Image Analysis and Processing (ICIAP 2005), held in Cagliari, Italy, at the conference centre “Centro della Cultura e dei Congressi”, on September 6–8, 2005. ICIAP 2005 was the thirteenth edition of a series of conferences organized every two years by the Italian group of researchersa?liated to the International Association for Pattern Recognition (GIRPR) with the aim to bring together researchers in image processing and pattern recognition from around the world. As for the previous editions, conference topics concerned the theory of image analysis and processing and its classical and Internet-driven applications. The central theme of ICIAP 2005 was “Pattern Recognition in the Internet and Mobile Communications Era”. The interest for such a theme was con?rmed by the large number of papers dealing with it, the special session devoted to pattern recognition for computer network security, and the emphasis of two invited talks on Internet and mobile communication issues. ICIAP 2005 received 217 paper submissions. Fifteen papers were collected into the two special sessions dealing with Pattern Recognition for Computer Network Security and Computer Vision for Augmented Reality and Augmented Environments.