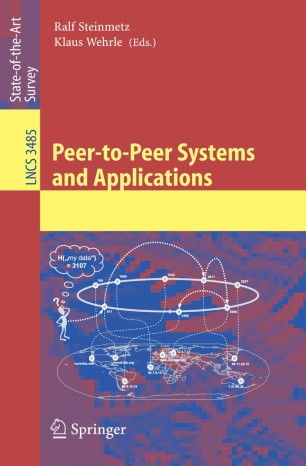 Starting with Napster and Gnutella, peer-to-peer systems became an integrated part of the Internet fabric attracting millions of users. According to recent evaluations, peer-to-peer traffic now exceeds Web traffic, once the dominant traffic on the Internet. While the most popular peer-to-peer applications remain file sharing and content distribution, new applications such as Internet telephony are emerging.

Within just a few years, the huge popularity of peer-to-peer systems and the explosion of peer-to-peer research have created a large body of knowledge, but this book is the first textbook-like survey to provide an up-to-date and in-depth introduction to the field.

This state-of-the-art survey systematically draws together prerequisites from various fields, presents techniques and methodologies in a principled and coherent way, and gives a comprehensive overview on the manifold applications of the peer-to-peer paradigm. Leading researchers contributed their expert knowledge to this book, each in his/her own specific area.

Lecturers can choose from the wide range of 32 tightly integrated chapters on all current aspects of P2P systems and applications, and thus individually tailor their class syllabi. R&D professionals active in P2P will appreciate this book as a valuable source of reference and inspiration.

Dr. Ralf Steinmetz worked for over nine years in industrial research and development of networked multimedia systems and applications. He has been head, since 1996, of the Multimedia Communications Lab at Darmstadt University of Technology, Germany. From 1997 to 2001 he directed the Fraunhofer (former GMD) Integrated Publishing Systems Institute IPSI in Darmstadt. In 1999 he founded the Hessian Telemedia Technology Competence Center (httc e.V.). His thematic focus in research and teaching is on multimedia communications with his vision of real "seamless multimedia communications". With over 250 refereed publications he has become ICCC Governor in 1999, leadership by the economic forum in Germany; was awarded the ranking of Fellow of both, the IEEE in 1999 and ACM in 2002.

Klaus Wehrle is leading the junior research group on Protocol-Engineering and Distributed Systems at Wilhelm-Schickard-Institute of Computer Science at University of Tübingen (Germany). In July 2002 he received his PhD degree (with honors) for his dissertation on flexible and scalable quality-of-service mechanisms for the next generation Internet, which was awarded with the 2002 Doctoral Dissertation Award of Südwestmetall Association and the 2002 FZI Doctoral Dissertation Award (German Research Center for Information Technologie, FZI). In August 2002 he joined the ICIR networking group at the International Computer Science Institute (ICSI) as a postdoctoral fellow in the area of Peer-to-Peer networking and overlay networks. In September 2003 he set up an independant junior research group in the area of Protocol-Engineering and Distributed Systems at University of Tübingen. His research activities are focused on (but not limited to) engineering of networking protocols, implementation techniques for protocols, formal description techniques for protocols, quality of service, multicast, network simulation, peer-to-peer-networking as well as all operating system issues of networking.