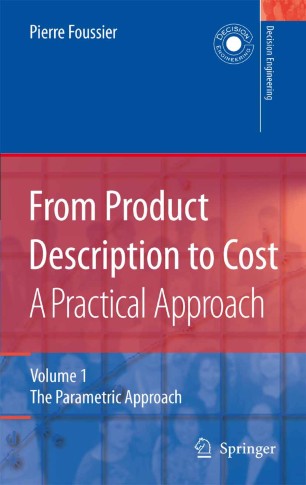 From Product Description to Cost: A Practical Approach

Parametric cost estimating, when properly used, is a very powerful and cost effective technique. Unfortunately, this technique is often misunderstood and rejected by many potential users for whom it could be a beneficial tool. The development of an agreement on how to use it and how to recognise its limitations is a major benefit to the cost estimating community.

From Product Description to Cost: A Practical Approach:

• presents different ways of parametrically forecasting costs, and the advantages and disadvantages of these methods by using real examples from the mechanical, software and building industries;

• discusses most of the mathematical procedures which are useful for parametrically forecasting costs; and,

• introduces the judgement needed to audit the ways in which these forecasting techniques are used, firstly as a process, and secondly as a tool to generate estimates.

Volume 1: The Parametric Approach contains four parts. Over the course of this volume, cost estimating is introduced; the preparation of data before utilization is discussed; the basic concepts of ‘general’ cost estimating models are examined; the use of cost models is considered and finally, risk analysis (as it can be used during parametric cost estimating) is introduced.

The Decision Engineering series focuses on the foundations and applications of tools and techniques related to decision engineering, and identifies their relevance in ‘engineering’ decisions. The series provides an aid to practising professionals and applied researchers in the development of tools for informed operational and business decision making, within industry, by utilising distributed organisational knowledge.

Pierre Foussier is manager of 3f, the company he founded in 1992 dedicated to the improvement of cost-estimating tools. In his job he develops parametric cost models and trains users of these models. As well as training project managers in cost-estimating, he often acts as a consultant for many diverse companies, carrying out independent cost estimates.

Foussier is a co-founder of AFITEP – a French non-profit organisation specialising in the progress of cost-estimating, planning and project management. He is also the founder of XPAR, a non-profit organisation aiming to promote the parametric method of cost-estimating. XPAR recently merged with AFITEP and is now the working group of this society in the domain of parametrics.

So far in his career, Foussier has been involved in the development and production of some equipment and systems for use in the military industry. He has also been an engineer at the French space agency (CNES) and has nearly twenty years experience of cost estimating for major space projects.