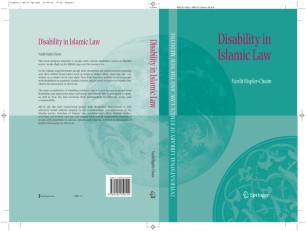 Part of the International Library of Ethics, Law, and the New Medicine book series (LIME, volume 32)

The book analyzes attitudes to people with various disabilities based on Muslim jurists’ works (fiqh) in the Middle Ages and the modern era.

In the Islamic legal literature people with disabilities are mentioned sporadically, and often within broad topics such as religious duties, jihad, marriage, etc., but seldom as a subject by its own right. Very little has been written so far on people with disabilities in a general Islamic context, much less in reference to Islamic law. This is the innovation of the book.

The main contribution of Disabilities in Islamic Law is that it focuses on people with disabilities and depicts the place and status that Islamic law has assigned to them, as well as how the law envisions their participation in religious, social, and communal life.

All in all, the laws concerning people with disabilities demonstrate a very advanced social outlook, to judge from the considerations and arguments of the Muslim jurists.

Scholars of Islamic law, medicine and ethics, Islamic studies, sociology, social work, and law, and anyone interested in comparative research of people with disabilities in various cultures and religions, will find an abundance of helpful information in the book.

“The appendix of the book itself is indeed a treasure and marvelously written. The book does not end here, but it has more gems at the end including notes, bibliography, index of disabilities, terminology, and names which increase the scholarly value of the book. … the book is a marvelous piece of writing and interesting for people from all religions, cultures, and professions.” (A. R. Memon, Journal of Religion and Health, Vol. 55, 2016)