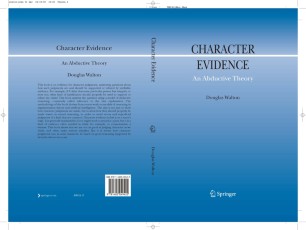 This book is on evidence for character judgments, answering questions about how such judgments are and should be supported or refuted by verifiable evidence. For example, if I claim that some particular person has integrity, or does not, what kind of justification should properly be used to support or refute the claim? This book answers the question using a model of abductive reasoning, commonly called inference to the best explanation. The methodology of the book derives from recent work on models of reasoning in argumentation theory and artificial intelligence. The aim is not just to show how character judgments are made, but to show how they should be properly be made based on sound reasoning, in order to avoid errors and superficial judgments of a kind that are common. Character evidence in law is on a razor’s edge. It is generally inadmissible, for it might tend to prejudice a jury, but it is a kind of evidence often needed in trials, for example, to cross-examine a witness. This book shows that we are not as good at judging character as we think, and often make serious mistakes. But it is shown how character judgments can, in some instances, be based on good reasoning supported by factual evidence in a case.