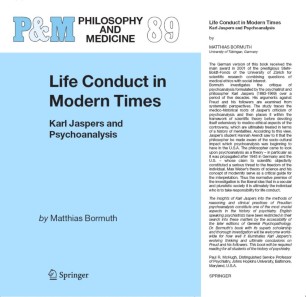 The German version of this book received the main award in 2001 of the prestigious Stehr-Boldt-Fonds of the University of Zürich for scientific research combining questions of medical ethics with social interest.

This award-winning book investigates the critique of psychoanalysis formulated by the psychiatrist and philosopher Karl Jaspers (1883-1969) over a period of five decades. His arguments against Freud and his followers are examined from systematic perspectives. The study traces the medico-historical roots of Jasper’s criticism of psychoanalysis and then places it within the framework of scientific theory before devoting itself extensively to medico-ethical aspects of the controversy, which are ultimately treated in terms of a history of mentalities. According to this view, Jasper’s student Hannah Arendt saw to it that the philosopher be made aware of the socio-cultural impact which psychoanalysis was beginning to have in the U.S.A. The philosopher came to look upon psychoanalysis as a theory – in particular as it was propagated after 1945 in Germany and the U.S. – whose claim to scientific objectivity constituted a serious threat to the freedom of the individual. Max Weber’s theory of science and his concept of modernity serve as a critical guide for the interpretation. Thus the normative premise of the investigation is the liberal idea that in a secular and pluralistic society it is ultimately the individual who is to take responsibility for life conduct.