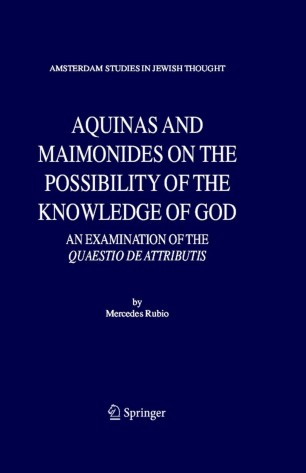 Aquinas and maimonides on the possibility of the knowledge of god

An examination of the quaestio de attributis

Thomas Aquinas wrote a text later known as Quaestio de attributis and ordered it inserted in a precise location of his Commentary on the Sentences of Peter Lombard more than a decade after composing this work. Aquinas assigned exceptional importance to this text, in which he confronts the debate on the issue of the divine attributes that swept the most important centres of learning in 13th Century Europe and examines the answers given to the problem by the representatives of the four mainstream schools of his time: the Greek mystic Dionysius Areopagita, the Latin Saint Anselm of Canterbury, the Jewish rabbi Moses Maimonides and the Muslim philosopher Ibn Sina.
This in-depth study of Thomas Aquinas’ Quaestio de attributis (In I Sent., d. 2, q. 1, a. 3) binds together the findings of previous research on the unique history of this text by reconstructing the historical circumstances surrounding its composition, shows that the Quaestio contains Aquinas’ final answer to the dispute on the divine attributes, and thoroughly examines his interpretation of Maimonides’ position on the issue of the knowledge of God by analysing this and other texts related to it chronologically and doctrinally. The examination of the Quaestio reveals the background of Thomas Aquinas’ renewed interest in Maimonides’ position on the issue and brings to light elements of Aquinas’ interpretation that are absent from his earlier references to Maimonides. Moreover, the chronological and doctrinal connection of the Quaestio de attributis to other Thomistic works with explicit references to Maimonides enables a reconstruction of his comprehensive approach to Maimonides’ teaching on the possibility and extent of the knowledge of God in the Guide of the Perplexed and highlights the place of Maimonides’ philosophical teachings in Thomas’ own thought in issues like "Being" as the proper name of God, the multiplicity of the divine names, the beatific vision in the afterlife, the causes that prevent the instruction of the multitude in divine matters and the role of faith and prophecy in the acquisition of the true knowledge of God in this life. The last chapter examines the reasons behind Aquinas’ silencing of Maimonides’ name when introducing his Five Ways for the knowledge of the existence of God, in spite of the evident relation between these and Maimonides’ Four Speculations. The study is completed with an extensive appendix that includes the text of the Quaestio de attributis with an English translation and the critical edition of several chapters of the 13th Century Latin translation of the Guide of the Perplexed known as Dux neutrorum