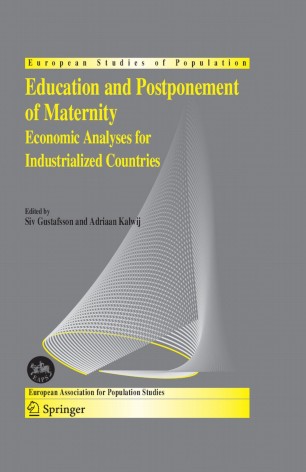 Education and Postponement of Maternity

One of the most important demographic issues of our time is the increasing age of women at motherhood. This happens in the northern social democratic states Sweden and Norway, in the catholic countries Italy, Spain and Ireland, in the West European countries Netherlands and Germany, in the former socialist transition countries Czech Republic and East Germany, and in the liberal democracy of the United States. The postponement of maternity and the related issue of declining fertility rates are of major interest to policy makers and have provoked much scientific research.

This book examines various economic aspects of the role of women’s education in the postponement of maternity in these ten industrialized countries. The chapters in this book each empirically investigate one of these countries using individual or household survey data and are in particular interested in the increasing age at motherhood with the investment in education of the mother. In search of socio-economic explanations for this relationship each chapter investigates a specific related research question. This results in a book that covers a wide range of topics on the economics of fertility decisions, such as career planning motives of women, consumption smoothing motives of households and the role of institutions.