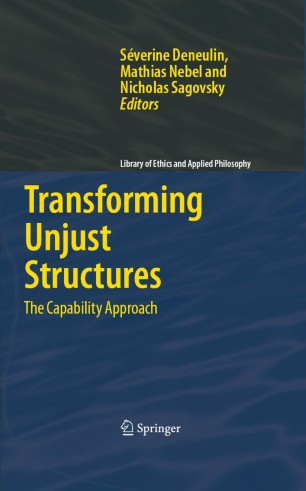 Part of the Library of Ethics and Applied Philosophy book series (LOET, volume 19)

The "capability approach" of development economist Amartya Sen, who received the Nobel Prize for Economics in 1998, poses a major challenge to the dominant paradigm of neo-classical economics. According to Sen, human well-being does not depend on the consumption of commodities but on the freedoms human beings have reason to choose and value. The capability approach has frequently been criticised for a lack of attention to the ways in which unjust social, political and economic structures restrict human capabilities. The contributors to this volume take up this criticism in a number of ways, both theoretical and practical. The theoretical discussion engages with the thought of Sen himself and with the hermeneutical tradition represented by Paul Ricoeur. The practical discussion consists of five case studies examining the effectiveness of the capability approach in dealing with cases of structural injustice. These cover: racism in South Africa; access to labour markets in Europe; participation in higher education in the UK; poverty and welfare reforms in the US; and biotechnology patents. How effectively, ask all the contributors, can Sen’s capability approach be deployed in the transformation of unjust structures?