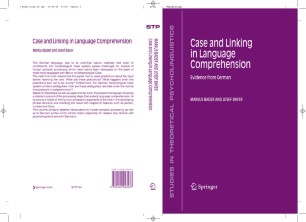 The German language, due to its verb-final nature, relatively free order of constituents and morphological Case system, poses challenges for models of human syntactic processing which have mainly been developed on the basis of head-initial languages with little or no morphological Case.

The verb-final order means that the parser has to make predictions about the input before receiving the verb. What are these predictions? What happens when the predictions turn out to be wrong? Furthermore, the German morphological Case system contains ambiguities. How are these ambiguities resolved under the normal time pressure in comprehension?

Based on theoretical as well as experimental work, the present monograph develops a detailed account of the processing steps that underly language comprehension. At its core is a model of linking noun phrases to arguments of the verb in the developing phrase structure and checking the result with respect to features such as person, number and Case.

This volume contains detailed introductions to human syntactic processing as well as to German syntax which will be helpful especially for readers less familiar with psycholinguistics and with Germanic.

Josef Bayer is Professor of Linguistics at the University of Konstanz. His specialization is mainly in syntactic theory, and comparative linguistics, Germanic and South-Asian. He was formerly at the University of Jena and has held positions in research centers in Germany and in the Netherlands.

"This is a very good book reporting lots of interesting work particularly for those who concern themselves with the boundary zone of syntax and processing. … First, it is a very well written. The text style is clear and simple; it is succinct and to the point. … Second, it provides all the background information … to make it accessible to non-specialists. … it is a significant contribution to the literature in its field. … I can heartily recommend it to others in the field." (Sam Featherston, The Journal of Comparative Germanic Linguistics, Vol. 11, 2008)