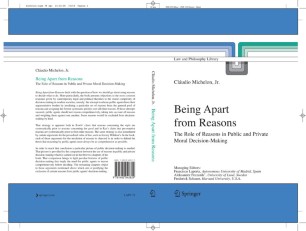 Being Apart from Reasons

The Role of Reasons in Public and Private Moral Decision-Making

Being Apart from Reasons deals with the question of how we should go about using reasons to decide what to do. More particularly, the book presents objections to the most common response given by contemporary legal and political theorists to the moral complexity of decision-making in modern societies, namely: the attempt to release public agents from their argumentative burden by insulating a particular set of reasons from the general pool of reasons and assigning the former systematic priority over all other reasons. If those attempts succeed, public agents should not reason comprehensively, taking into account all reasons and weighing them against one another. Some reasons would be excluded from decision-making by kind.

That strategy is apparent both in Rawls’ claim that reasons concerning the right are systematically prior to reasons concerning the good and in Raz’s claim that pre-emptive reasons are systematically prior to first-order reasons. The same strategy is also instantiated by certain arguments for the procedural value of law, such as Jeremy Waldron’s. In the book, each of those arguments for the insulation of reasons is objected to in order to defend the thesis the reasoning by public agents must always be as comprehensive as possible.