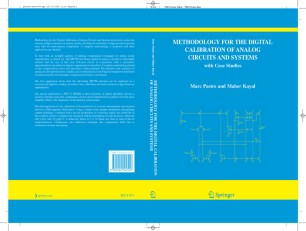 METHODOLOGY FOR THE DIGITAL CALIBRATION OF ANALOG CIRCUITS AND SYSTEMS

Part of the The International Series in Engineering and Computer Science book series (SECS, volume 870)

Methodology for the Digital Calibration of Analog Circuits and Systems shows how to relax the extreme design constraints in analog circuits, allowing the realization of high-precision systems even with low-performance components. A complete methodology is proposed, and three applications are detailed.

The first application shows how the sub-binary M/2+M structure can be employed as a conventional digital-to-analog converter if two calibration and radix conversion algorithms are implemented.

The second application, a SOI 1T DRAM, is then presented. A digital algorithm chooses a suitable reference value that compensates several circuit imperfections together, from the sense amplifier offset to the dispersion of the memory read currents.

The third application is the calibration of the sensitivity of a current measurement microsystem based on a Hall magnetic field sensor. Using a variant of the chopper modulation, the spinning current technique, combined with a second modulation of a reference signal, the sensitivity of the complete system is continuously measured without interrupting normal operation. A thermal drift lower than 50 ppm/°C is achieved, which is 6 to 10 times less than in state-of-the-art implementations. Furthermore, the calibration technique also compensates drifts due to mechanical stresses and ageing.