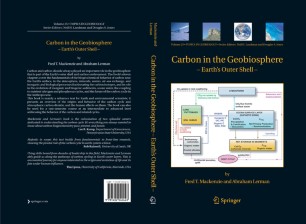 Part of the TOPICS IN GEOBIOLOGY book series (TGBI, volume 25)

Carbon and carbon dioxide always played an important role in the geobiosphere that is part of the Earth’s outer shell and surface environment. The book’s eleven chapters cover the fundamentals of the biogeochemical behavior of carbon near the Earth’s surface, in the atmosphere, minerals, waters, air-sea exchange, and inorganic and biological processes fractionating the carbon isotopes, and its role in the evolution of inorganic and biogenic sediments, ocean water, the coupling to nutrient nitrogen and phosphorus cycles, and the future of the carbon cycle in the Anthropocene.

This book is mainly a reference text for Earth and environmental scientists; it presents an overview of the origins and behavior of the carbon cycle and atmospheric carbon dioxide, and the human effects on them. The book can also be used for a one-semester course at an intermediate to advanced level addressing the behavior of the carbon and related cycles.