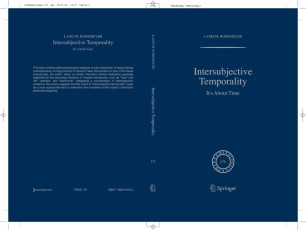 (YET ANOTHER INTRODUCTION IN PHENOMENOLOGY) In both his published and unpublished works, Edmund Husserl, the "father of phenomenology,” struggles repeatedly with the relation of the individual subject and intersubjectivity. Since his phenomenology is based upon the temporalizing foundations of the subject, though, he is often accused of solipsism, and his efforts at integrating the subject with an intersubjective existence are registered as falling short of their goal. Important philosophers who use phenomenology as their basis, such as Martin Heidegger and Maurice Merleau-Ponty, furthermore, while implicitly criticizing his limitations, assume the existence of intersubjective foundations without 2 taking up the existence and formation of these foundations themselves. This book addresses the above problematic at several levels: First, it is a careful analysis of Husserl's understanding of inner time-consciousness. I take up each aspect of temporalizing consciousness (i. e. , Urimpression, retention, and protention), explaining it in light of Husserl's phenomenology and showing how it functions in the whole of the "living present,” i. e. , our active, constituting consciousness. These sections of the book are helpful both to the uninitiated student trying to enter the world of Husserl's "inner ti- consciousness" and to the experienced Husserl scholar who desires a closer look at Husserl's theory of temporalizing consciousness. Second, as my analyses take us to Husserl's recently published manuscripts, I provide an explanation of Husserl's later considerations of temporalizing consciousness, showing how he developed his earliest conceptions.