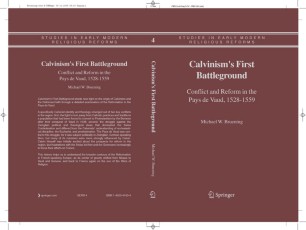 Calvinism's First Battleground sheds new light on the origin of Calvinism and the Reformed faith through a detailed examination of the Reformation in the Pays de Vaud.

A specifically Calvinist identity and theology emerged out of two key conflicts in the region: first, the fight to turn away from Catholic practices and traditions a population that had been forced to convert to Protestantism by the Bernese after their conquest of Vaud in 1536; second, the struggle against the Zwinglian political and theological ideas that dominated the Swiss Confederation and differed from the Calvinists' understanding of ecclesiastical discipline, the Eucharist, and predestination. The Pays de Vaud was central to this struggle, for it was subject politically to Zwinglian, German-speaking Bern, but many of its ministers were more strongly influenced by Calvin. Calvin himself was initially excited about the prospects for reform in the region, but frustrations with the Swiss led him and the Genevans increasingly to focus their efforts on France.

This history helps us to understand the broader contours of the Reformation in French-speaking Europe, as its center of gravity shifted from Meaux to Vaud and Geneva, and back to France again on the eve of the Wars of Religion.

"Most scholarly work on the early Reformation in French-speaking areas has focused on Calvin and Geneva. Michael Bruening has had the genial idea of placing his focus instead on the Pays de Vaud, the largest single political entity in French Switzerland. [...] Bruening's analysis is backed throughout by archival research in several parts of Switzerland. [...] It makes a significant contribution to our knowledge of the history of the early Reformation in French-speaking parts of Europe."
Robert M. Kingdon, University of Wisconsin-Madison, in Renaissance Quarterly

"[...] Bruening deploys disparate bits of information to construct a plausible and basically persuasive argument about the political and theological significance of the early Reformation in this area. Better still, he sets his topic convincingly into wider contexts by integrating it with works by such major experts as his mentor (Heiko Oberman†, EA) and Robert Kingdon. [...] I have seldom seen such an untidy package wrapped up so neatly."
William Monter, Northwestern University, in The English Historical Review CXXIII 501 (April 2008)