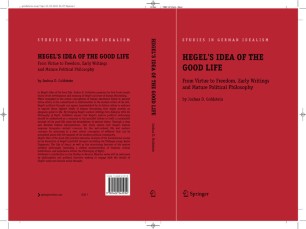 Hegel's Idea of the Good Life

In Hegel’s Idea of the Good Life, Joshua D. Goldstein presents the first book-length study of the development and meaning of Hegel’s account of human flourishing.

When compared to the robust conceptions of human excellence found in ancient virtue ethics or the commitment to individualism in the modern ethics of the will, Hegel’s political thought can appear impoverished for its failure either to embrace or exposit those highest ideals of human flourishing that might provide an adequate guide to life. By bringing Hegel’s earliest writings into dialogue with his Philosophy of Right, Goldstein argues that Hegel’s mature political philosophy should be understood as a response to his youthful failure to build a sustainable account of the good life upon the foundations of ancient virtue. Through a clear and detailed textual interpretation, this study reveals how Hegel’s mature response integrates ancient concerns for the well-ordered life and modern concerns for autonomy in a new, robust conception of selfhood that can be actualized across the full expanse of the modern political community.

Hegel’s Idea of the Good Life provides extensive analysis of the foundational essays in the formation of Hegel’s youthful thought (including the Tübingen essay, Berne Fragments, The Life of Jesus) as well as the structuring features of his mature political philosophy (including a critical reconstruction of freedom, ethical institutions, and experience within the Philosophy of Right).

Goldstein’s contribution to the Studies in German Idealism series will be welcomed by philosophers and political theorists seeking to engage with the details of Hegel’s early and mature social thought.