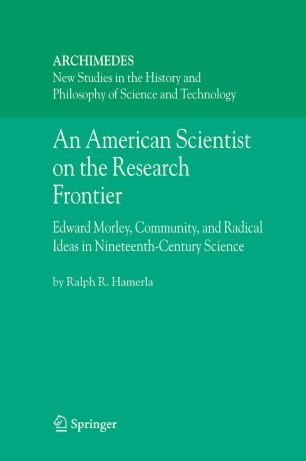 An American Scientist on the Research Frontier

An American Scientist on the Research Frontier is the first scholarly study of the nineteenth-century American scientist Edward Williams Morley. In part, it is the long-overdue story of a man who lent his name to the Michelson and Morley Ether-Drift Experiment, and who conclusively established the atomic weight of oxygen. It is also the untold story of science in provincial America: what Hamerla presents as science on the "American research frontier." Hamerla carefully and usefully directs our attention away from more familiar sites of scientific activity during the nineteenth century, such as Harvard, Yale and Johns Hopkins. In so doing, he expands and reframes our understanding of how—and where—important scientific inquiry occurred during these years: not only in the Northeastern centers of elite academia, but also in the vastly different cultural contexts of Hudson and Cleveland, Ohio. This important examination of Morley’s struggle for personal and professional legitimacy extends and transforms our understanding of science during a foundational period, and leads to a number of unique conclusions that are vital to the literature and historiography of science. By revealing important aspects of the scientific culture of the American heartland, An American Scientist on the Research Frontier deepens our understanding of an individual scientist and of American science more broadly. In so doing, Hamerla changes the way we

approach and understand the creation of scientific knowledge, scientific communities, and the history of science itself.