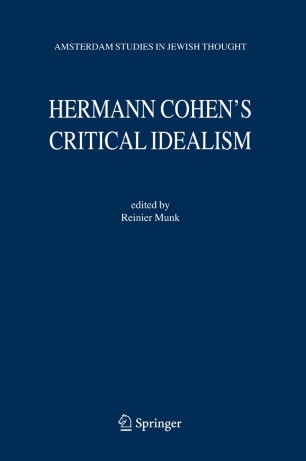 Hermann Cohen (1842-1918) is an original systematic thinker and representative of the Marburg School of Critical Idealism. The Marburg School was a leading school in German academic philosophy and in German Jewish philosophy for a period of over thirty years preceding the First World War. Initially standing at the front of the ‘Return to Kant’ movement, Cohen subsequently went beyond Kant in developing a system of critical idealism in which he offered a critique of and alternative to absolute idealism, positivism, and materialism. A critical idealist in heart and soul, Cohen is also recognized as a man who embodied German Jewish culture.

Publications on Cohen in the English language are small in number and this volume aims to fill the gap. It offers an analysis of Cohen’s System of Philosophy - the three-volume classic on logic, ethics, and aesthetics - and his writings on Judaism and religion. The book highlights Cohen’s contributions in these fields, including his discussions with Maimonides, Leibniz, Kant, and Hegel. It demonstrates the congeniality of Cohen’s critical idealism as expounded in the System and his writings on Judaism, and offers an overview of contemporary Cohen research.

"The essays in this volume, which gathers an impressive group of scholars from around the world, are organized along these focal points of Cohen’s system: logic, ethics, aesthetics, and religion. … will provide a solid introduction for those who want a first glimpse of Cohen’s philosophy. It is to be hoped that the present volume will lead to future English-language studies on a philosopher whose wealth of work intersects not only with philosophers, but also with historians, legal scholars, and theologians." (Sebastian Luft, Journal of the History of Philosophy, Vol. 45, October, 2007)