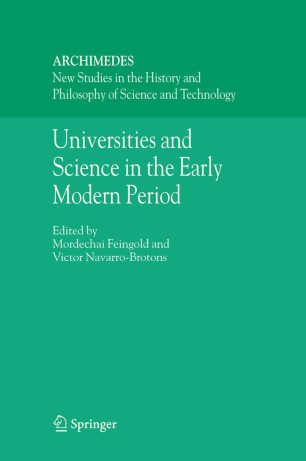 Universities and Science in the Early Modern Period

The past two decades have witnessed a striking re evaluation of early modern institutions of higher learning as impoverished intellectual centers, hostile to new modes of thought. The present volume offers the most comprehensive synthesis to date of the fecundity of early modern universities, their receptivity to novel scientific ideas, and their contribution to the critical dialogue that vitalized the emergent European scientific community. The "soul" of the early modern university was its well-rounded, humanistically informed curriculum and the culture of erudition it inculcated. The authors of this volume offer a fresh assessment of how this course of study affected generations of natural philosophers, from the Iberian Peninsula to Scandinavia, from Italy to Scotland, even as it was increasingly modified to accommodate the new science. The fresh evidence gathered here emphasizes just how rigorously science was pursued by academics, notwithstanding institutional constraints. Individually, each paper illustrates the nexus of complexities specific locales made on the reception and transmission of scientific ideas; collectively, the papers offer a comparative framework that should prove invaluable in our evaluating the profound changes undergone by early modern universities during the era of Scientific Revolution.