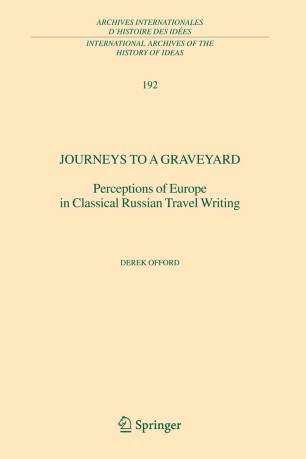 Journeys to a Graveyard

Journeys to a Graveyard examines the descriptions provided by eight Russian writers of journeys made to western European countries between 1697 and 1880. The descriptions reveal the mentality and preoccupations of the Russian social and intellectual elites during this period. The travellers' perceptions of western European countries are treated here as an ambivalent response to a civilization with which Russia was belatedly coming into close contact as a result of the imperial ambition of the Russian state and the westernization of the Russian elites. The travellers perceived the most advanced European countries as superior to Russia in terms of material achievement and the maturity and refinement of their cultures, but they also promoted a view of Russia as in other respects superior to the western nations. Heavily influenced from the late eighteenth century by Romanticism and by the rise of nationalism in the west, they tended to depict European civilization as moribund. By this means they managed to define their own emergent nation in a contrastive way as having youth and promising futurity.

"Offord provides each travelogue with a succinct introduction to its specific European and Russian geopolitical, social, literary, and cultural context and its author’s biography. The book’s strength is the skilful contextualization and broadly cultural analysis of each text. … Offord’s monograph is an outstanding contribution to travelogue research and intellectual history. Superb contextualization and bibliographical depth and breadth make it useful to experts and accessible to nonexperts. Clear writing, perfect organization and layout, and a total lack of typos enhance the reading pleasure." (Gitta Hammarberg, Slavic Review, Vol. 65 (4), 2006)

"Offord deconstructs published travel writings composed by eight Russian elites over a period spanning the rise of Peter the Great’s empire in the late seventeenth century to the early reign of Alexander III in the late nineteenth. … Offord’s book will interest readers concerned with travel writing as a literary form and as a conduit for defining the self as much … ." (Brigid O’Keeffe, H-Net Reviews, February, 2007)

"DEREK OFFORD’S Journeys to a Graveyard concerns itself with Russian travel narratives to Western Europe between 1697 and 1881, with an emphasis on the period from the late 1830s to the 1860s … . with helpful historical and biographical backgrounders, this study should attract the interest of both specialists and the general public. … it offers an invaluable view onto the intellectual history of nineteenth-century Russia."(Andreas Schönle, The Slovonic and East European Reivew, Vol. 86 (4), October, 2008)