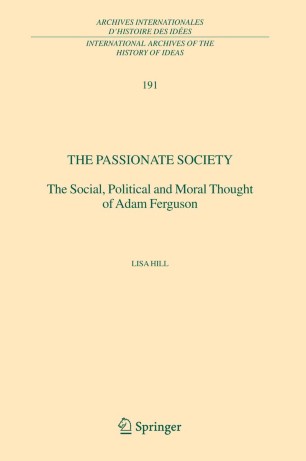 The Social, Political and Moral Thought of Adam Ferguson

Adam Ferguson (1723-1816) was a major figure of the Scottish Enlightenment whose thought was, in many respects, original and distinctive. This book is a study of his ideas and of the intellectual forces that shaped them.

Though somewhat overlooked in the nineteenth century, Ferguson was rescued from obscurity in the first half of the twentieth century by scholars interested in the origins of sociology and early critiques of modernity. Ferguson’s interest in the mechanics of social life and especially social change led him to many groundbreaking insights. In fact, he is sometimes identified as the 'Father of Modern Sociology'. In addition to exploring whether or not he merits this title, this study examines the whole of Ferguson’s thought as a system and includes his moral and faculty psychology, historiography, theology, politics and social science.

Ferguson is distinguished by his deep appreciation of the complexity of the human condition; his study of society is based on the belief that it is not only reason, but the unseen, unplanned, sub-rational and visceral forces that keep the human universe in motion. Ferguson’s appreciation of this fact, and his ability to make social science of it, is his major achievement.