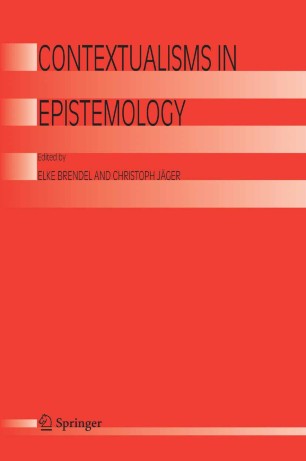 Contextualism has become one of the leading paradigms in contemporary epistemology. According to this view, there is no context-independent standard of knowledge, and as a result, all knowledge ascriptions are context-sensitive. Contextualists contend that their account of this analysis allows us to resolve some major epistemological problems such as skeptical paradoxes and the lottery paradox, and that it helps us explain various other linguistic data about knowledge ascriptions. The apparent ease with which contextualism seems to solve numerous epistemological quandaries has inspired the burgeoning interest in it.

Elke Brendel is Professor of Philosophy at the Johannes Gutenberg University in Mainz, Germany. She has published numerous articles on logic, epistemology, the philosophy of science, and the philosophy of language. She is the author of Die Wahrheit über den Lügner (The Truth About the Liar, 1992), Grundzüge der Logik II – Klassen, Relationen, Zahlen (Foundations of Logic II – Sets, Relations, Numbers, with Wilhelm K. Essler, 1993), and Wahrheit und Wissen (Truth and Knowledge, 1999).

Christoph Jäger is Lecturer in Philosophy at Aberdeen University, United Kingdom, and Privatdozent of Philosophy (honorary office) at the University of Leipzig, Germany. He has published numerous articles on epistemology, the philosophy of mind, and the philosophy of religion. Books: Selbstreferenz und Selbstbewusstsein (Self-reference and Self-knowledge, 1999), Analytische Religionsphilosophie (Analytic Philosophy of Religion, ed., 1998), Kunst und Erkenntnis (Art and Knowledge, ed., with Georg Meggle, 2004), Religion und Rationalität (Religion and Rationality, forthcoming).