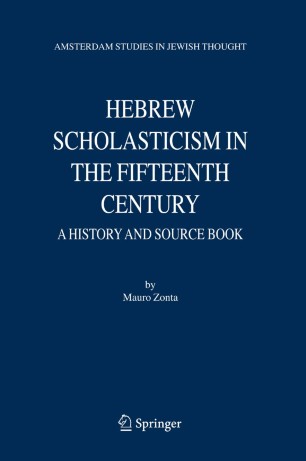 Hebrew Scholasticism in the Fifteenth Century

A History and Source Book

In their pursuit of a renewal of Jewish philosophy, a number of scholars active in Spain and Italy in the second half of the fifteenth century (Abraham Bibago, Baruch Ibn Ya‘ish, Abraham Shalom, Eli Habillo, Judah Messer Leon) turned to the doctrines and methods of contemporary Latin Scholasticism. These philosophers, who read Latin very well, were impressed by the theories formulated by their Latin colleagues (Albert the Great, Thomas Aquinas, William of Ockham, John Duns Scotus and their followers). They composed original works in Hebrew (mainly commentaries and questions on Aristotle), in which they faithfully reproduced the techniques and terminology of late Scholasticism, and explicitly quoted and discussed Scholastic texts and doctrines about logic, physics, metaphysics and ethics.

Thus, in fifteenth century Italy and Spain there came into being what we may call a "Hebrew Scholasticism": Jewish authors composed philosophical treatises in which they discussed the same questions and used the same methods as contemporary Christian Schoolmen. These thinkers were not simply influenced by Scholasticism: they were real Schoolmen who tried to participate (in a different language) in the philosophical debate of contemporary Europe.

A history of "Hebrew Scholasticism" in the fifteenth century is yet to be written. Most of the sources themselves remain unpublished, and their contents and relationship to Latin sources have not yet been studied in detail. What is needed is to present, edit, translate and comment on some of the most significant texts of "Hebrew Scholasticism", so that scholars can attain a more precise idea of its extent and character.

This book aims to respond to this need. After a historical introduction, where a "state of the art" about research on the relationship between Jewish philosophy and science and Latin Scholasticism in the thirtheenth-fifteenth centuries is given, the book consists of four chapters. Each of them offers a general bio-bibliographical survey of one or two key-authors of fifteenth-century "Hebrew Scholasticism", followed by English translations of some of their most significant "Scholastic" works or of some parts of them: Abraham Bibago’s "Treatise on the Plurality of Forms", Baruch Ibn Ya’ish’s commentaries on Aristotle’s "Nicomachean Ethics" and "De anima", Eli Habillo’s introduction to Antonius Andreas’s commentary on the "Metaphysics", Judah Messer Leon’s commentary on Aristotle’s "Physics" and questions on Porphyry’s "Isagoge". The Hebrew section includes critical editions of some of the translated texts, and a Latin-Hebrew glossary of technical terms of Scholasticism.