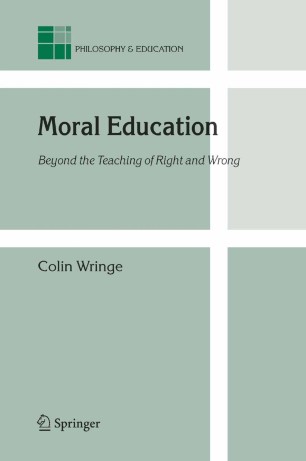 Beyond the Teaching of Right and Wrong

Part of the Philosophy and Education book series (PHED, volume 14)

Beyond the Teaching of Right and Wrong

This volume is unique in providing a comprehensive discussion of moral education in the light of a range of ethical theories. In a balanced, thoughtful and penetrating account, all of these are shown to have a contribution to make to our moral understanding, and hence to moral education, even if none provides a definitive criterion of moral conduct. Though divine command is rejected as a source of moral justification, the possible contribution of some religious traditions to moral education is sympathetically considered. Fashionable relativism and recent moves towards inculcatory authoritarianism are both firmly rejected. The argument is philosophically rigorous throughout. Contemporary issues addressed include the links between personal morality and citizenship, including world citizenship, family values and sexual morality. A final chapter considers some of the practical concerns of the moral educator. The language is lucid and concise and, though written with professional philosophers of education and teacher educators in mind, the text will be readily accessible to practising teachers and those in training, as well as to members of the general public concerned for the moral education of the next generation.

This volume is for professional philosophers of education and teacher educators, as well as for school teachers and administrators, teachers in training and other education students.

"It cautions against the current tendency to reduce moral education to a set of specific rules and behaviours" [and is to be praised for] "its emphasis on the complexity of the moral life and its openness to a variety of views."

"Its critiques (of recent discussions of moral education) are well done." [It also] "contains an excellent review of current moral theory."

"I found these chapters valuable . . . because they provide first rate formulations and discussions of the views taken up. I do not know of a better review of contemporary moral theory. It is thoroughly well written and well argued…Wringe does an excellent job of developing an even handed critique. The final chapters on citizenship are also well done."

"I think the main contribution of this book is to pull together a body of philosophical material relevant to moral education in one place and to provide an invariably competent and readable discussion and critique of this material."

"In fact, it is superbly written."