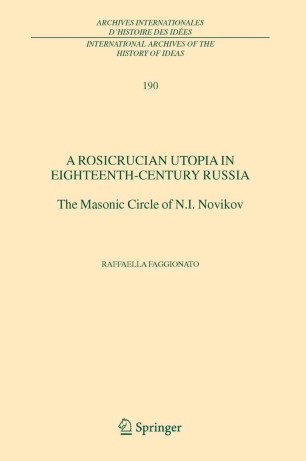 A Rosicrucian Utopia in Eighteenth-Century Russia

The Masonic Circle of N.I. Novikov

Part of the International Archives of the History of Ideas book series (ARCH, volume 190)

The author undertakes an investigation into the history of Russian Freemasonry that has not been attempted previously. Her premise is that the Russian Enlightenment shows peculiar features, which prevent the application of the interpretative framework commonly used for the history of western thought. The author deals with the development of early Russian masonry, the formation of the Novikov circle in Moscow, the ‘programme’ of Rosicrucianism and the character of its Russian variant and, finally, the clash between the Rosicrucians and the State. The author concludes that the defenders of the Ancien Régime were not wrong. In fact the democratic behaviour, the critical attitude, the practice of participation, the freedom of thought, the tolerance for the diversity, the search for a direct communication with the divinity, in short all the attitudes and behaviours first practiced inside the eighteenth century Rosicrucian lodges constituted a cultural experience which spread throughout the entire society. Novikov’s imprisonment in 1792 and the war against the Rosicrucian literature were attempts to thwart a culture, based on the independence of thought that was taking root inside the very establishment, representing a menace to its stability.