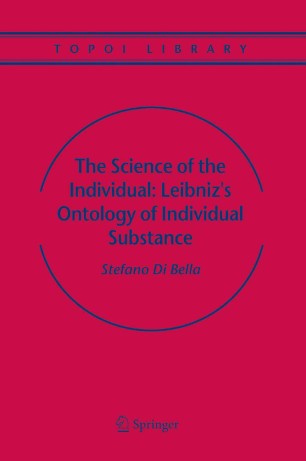 The Science of the Individual: Leibniz's Ontology of Individual Substance

In his well-known Discourse on Metaphysics, Leibniz puts individual substance at the basis of metaphysical building. In so doing, he connects himself to a venerable tradition. His theory of individual concept, however, breaks with another idea of the same tradition, that no account of the individual as such can be given.

Contrary to what has been commonly accepted, Leibniz’s intuitions are not the mere result of the transcription of subject-predicate logic, nor of the uncritical persistence of some old metaphysical assumptions. They grow, instead, from an unprejudiced inquiry about our basic ontological framework, where logic of truth, linguistic analysis, and phenomenological experience of the mind’s life are tightly interwoven. Leibniz’s struggle for a concept capable of grasping concrete individuals as such is pursued in an age of great paradigm changes – from the Scholastic background to Hobbes’s nominalism to the Cartesian ‘way of ideas’ or Spinoza’s substance metaphysics – when the relationships among words, ideas and things are intensively discussed and wholly reshaped.

This is the context where the genesis and significance of Leibniz’s theory of ‘complete being’ and its concept are reconstrued. The result is a fresh look at some of the most perplexing issues in Leibniz scholarship, like his ideas about individual identity and the thesis that all its properties are essential to an individual.

The questions Leibniz faces, and to which his theory of individual substance aims to answer, are yet, to a large extent, those of contemporary metaphysics: how to trace a categorial framework? How to distinguish concrete and abstract items? What is the metaphysical basis of linguistic predication? How is trans-temporal sameness assured? How to make sense of essential attributions? In this ontological framework Leibniz’s further questions about the destiny of human individuals and their history are spelt out. Maybe his answers also have something to tell us.

This book is aimed at all who are interested in Leibniz’s philosophy, history of early modern philosophy and metaphysical issues in their historical development.

"This study is an impressive piece of work which makes a real contribution to our understanding of Leibniz’s theory of individuals. It offers a very illuminating, sophisticated, and scholarly account of tensions and developments in Leibniz’s thinking about these issues. ... It is particularly insightful also about his relations with other philosophers such as Suarez, Descartes, Hobbes and Arnauld." (Nicholas Jolley, University of California, Irvine, Department of Philosophy (editor of the "Cambridge Companion to Leibniz")