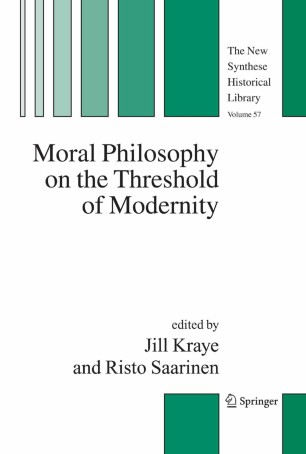 Moral Philosophy on the Threshold of Modernity

This volume investigates the paradigm changes which occurred in ethics during the early modern era (1350-1600). While many general claims have been made regarding the nature of moral philosophy in the period of transition from medieval to modern thought, the rich variety of extant texts has seldom been studied and discussed in detail. The present collection attempts to do this. It provides new research on ethics in the context of Late Scholasticism, Neo-Scholasticism, Renaissance Humanism and the Reformation. It traces the fate of Aristotelianism and of Stoicism, explores specific topics such as probabilism and casuistry, and highlights the connections between Protestant theology and early modern ethics. The book also examines how the origins of human rights, as well as different views of moral agency, the will and the emotions, came into focus on the eve of modernity.

"This is a collection of fifteen essays ... on Early Modern Thought. The editors intend the volume to reflect current, historical and philosophical scholarship about the moral thought of the fifteenth and sixteenth centuries. … The topic of rights connects these essays … and they provide a fascinating background to the role of individual rights in modern thought. This is important reading for anyone interested in rights and well worth the acquisition of this volume." (Douglas Langston, Journal of the History of Philosophy, Vol. 44 (3), 2006)