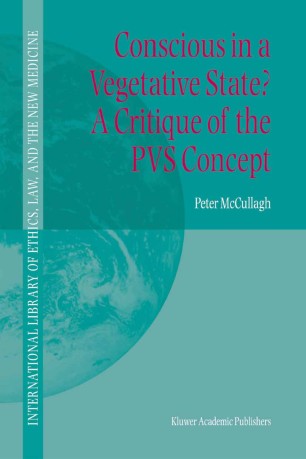 Conscious in a Vegetative State? A Critique of the PVS Concept

Part of the International Library of Ethics, Law, and the New Medicine book series (LIME, volume 23)

Having been originally introduced as a term to facilitate discussion of a specific group of patients regarded as entering a state of unawareness following coma, the 'Persistent Vegetative State' (PVS) has established itself as an apparently discrete medical condition with clear-cut implications for ethicists and lawyers that exceed any scientifically based understanding. As a consequence of this upgrading, conclusions drawn about the status and hence the management of this uncommon condition have been increasingly extended to other patients with much more common forms of disability. This book traces the origins of prevailing perceptions about PVS and submits these to critical examination. In doing this it comes to the conclusion that inadequate attention has been paid to acknowledging what is not known about affected individuals and that assumptions have consistently come to be traded as facts. Re-examination of the basis of the PVS and the adoption of a more scientific approach is long overdue and is owed to the community at large which has generally been provided by many medical practitioners with a 'dumbed-down' account of the condition. The book will be of interest to philosophers, medical graduates and neuroscientists but is also intended to remain accessible to the general reader with an interest in the wider implications of trends in medical thinking for attitudes towards many classes of patient. It has an extensive bibliography and will be of specific interest to bioethicists and lawyers with professional interests in PVS.