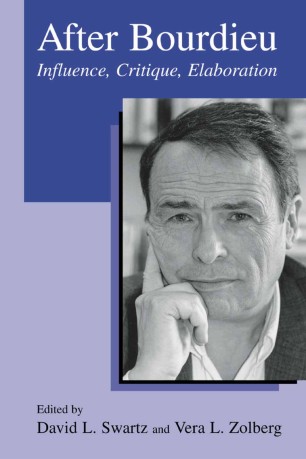 critical evaluations of his work, notably papers by Rodney Benson, 4 Rogers Brubaker, Nick Crossley, and John Myles. Indeed, it is the 1985 article by Rogers Brubaker that can truly be said to have served as one of the best introductions to Bourdieu’s thought for the American social scienti?c public. It is for this reason that we include it in the present collection. Intellectual origins & orientations We begin by providing an overview of Bourdieu’s life as a scholar and a public intellectual. The numerous obituaries and memorial tributes that have appeared following Bourdieu’s untimely death have revealed something of his life and career, but few have stressed the intersection of his social origins, career trajectory, and public intellectual life with the changing political and social context of France. This is precisely what David Swartz’s “In memoriam” attempts to accomplish. In it he emphasizes the coincidence of Bourdieu’s young and later adulthood with the period of decolonization, the May 1968 French university crisis, the opening up of France to privatization of many domains previously entrusted to the state (l’état providence), and, most threatening to post-World War II reforms, the emergence of globalization as the hegemonic structure of the 21st century. An orienting theme throughout Bourdieu’s work warns against the partial and fractured views of social reality generated by the fundamental subject/object dichotomy that has plagued social science from its very beginning.