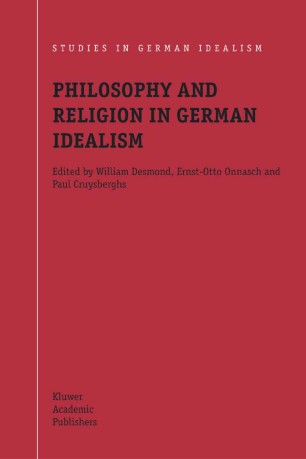 Philosophy and Religion in German Idealism

This book contains the selected proceedings of a conference on Religion in German Idealism which took place in Nij- gen (Netherlands) in January 2000. The conference was - ganized by the Centre of German Idealism, which co-or- nates the research on classical German philosophy in the Netherlands and in Belgium. Generous support of the Dutch Organisation for Scientific Research (NWO) has made this conference possible. A few months after the conference Ludwig died, and this circumstance unexpectedly delayed efforts to bring the proceedings of the conference to p- lished form. We are now happy to present those proce- ings, dedicated to the memory of the founding father of the Centre. It was a great joy to work with Ludwig; it was an even greater joy to be reckoned amongst his friends. It was part of Ludwig’s distinctive charisma that he was able to combine friendship together with collaboration in philo- phical and scholarly work. William Desmond Ernst-Otto Onnasch Paul Cruysberghs ix INTRODUCTION WILLIAM DESMOND, ERNST-OTTO ONNASCHand PAUL CRUYSBERGHS 1 The studies in this book testify to the intimate relation of philosophy and religion in German idealism, a relation not also devoid of tensions, and indeed conflicts. Idealism gave expression to a certain affirmation of the autonomy of p- losophical reason, but this autonomy was one that tried to take into account the importance of religion. Sometimes the results of this claim to autonomy moved towards criticism of religion.