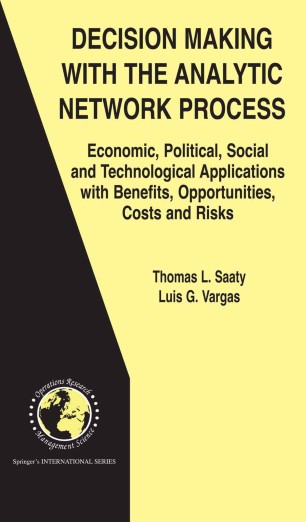 The Analytic Network Process (ANP) developed by Thomas Saaty in his work on multicriteria decision making applies network structures with dependence and feedback to complex decision making. This book is a selection of applications of ANP to economic, social and political decisions, and also to technological design. The chapters comprise contributions of scholars, consultants and people concerned about the outcome of certain important decisions who applied the Analytic Network Process to determine the best outcome for each decision from among several potential outcomes. The ANP is a methodological tool that is helpful to organize knowledge and thinking, elicit judgments registered in both in memory and in feelings, quantify the judgments and derive priorities from them, and finally synthesize these diverse priorities into a single mathematically and logically justifiable overall outcome. In the process of deriving this outcome, the ANP also allows for the representation and synthesis of diverse opinions in the midst of discussion and debate.

The ANP offers economists a considerably different approach for dealing with economic problems than the usual quantitative models used. The ANP approach is based on absolute scales used to represent pairwise comparison judgments in the context of dominance with respect to a property shared by the homogeneous elements being compared. How much or how many times more does A dominate B with respect to property P? Actually people are able to answer this question by using words to indicate intensity of dominance that all of us are equipped biologically to do all the time (equal, moderate, strong, very strong, and extreme) whose conversion to numbers, validation and extension to inhomogeneous elements form the foundation of the AHP/ANP. Numerous applications of the ANP have been made to economic problems, among which prediction of the turn-around dates for the US economy in the early 1990’s and again in 2001 whose accuracy and validity were both confirmed later in the news. They were based on the process of comparisons of mostly intangible factors rather than on financial, employment and other data and statistics.

"The main contribution of the book under review consists in the presentation, discussion and illustration of a method of analysis of multi-object systems with complex structure of mutual dependences or relations. … chapters are heuristically presented case studies illustrating the method by means of numerous tables, evolutionary diagrams and structural schemes. Each case is analyzed and discussed and its structure is characterized by means of analytic networks. The style of presentation is oriented rather to managers and organizers." (Milan Mares, Zentralblatt MATH, Vol. 1099 (1), 2007)

"This book addresses the application of network structures with dependence and feedback in making decisions. … This book gives numerous examples of potential uses for the ANP and its many variations. … In addition, the availability of the SuperDecisions software (2006), the personal computer implementation of the ANP, makes this book a wonderful practice guide for decision makers, consultants, and teachers and students in business and engineering schools." (John Wang and Ruben Xing, Interfaces, Vol. 37 (5), 2007)