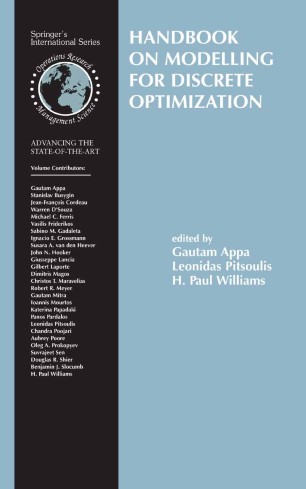 Handbook on Modelling for Discrete Optimization

It has long been recognized that "modelling" is a critically important mathematical activity in designing algorithms for solving these discrete optimization problems. Nevertheless solving the resultant models is also often far from straightforward. In recent years it has become possible to solve many large-scale discrete optimization problems. However, some problems remain a challenge, even though advances in mathematical methods, hardware, and software technology have pushed the frontiers forward. This handbook couples the difficult, critical-thinking aspects of mathematical modeling with the hot area of discrete optimization. It will be done in an academic handbook treatment outlining the state-of-the-art for researchers across the domains of the Computer Science, Math Programming, Applied Mathematics, Engineering, and Operations Research. Included in the handbook's treatment are results from Graph Theory, Logic, Computer Science, and Combinatorics.

The chapters of this book are divided into two parts: (1) one dealing with general methods in the modelling of discrete optimization problems and (2) the other with specific applications. The first chapter of this volume, written by H. Paul Williams, can be regarded as a basic introduction of how to model discrete optimization problems as mixed integer problems, and outlines the main methods of solving them. In the second part of the book various real life applications are presented, most of them formulated as mixed integer linear or nonlinear programming problems. These applications include network problems, constant logic problems, many engineering problems, computer design, finance problems, medical diagnosis and medical treatment problems, applications of the Genome project, an array of transportation scheduling problems, and other applications.

Further information including a detailed Table of Contents and Preface can be found and examined on the Handbook's web pages at http://www.springer.com/0-387-32941-2.

"The book consists of a collection of self-contained chapters written by well-respected experts in the field. … the style of presentation is sufficiently uniform. … the editors formulate demonstration and communication of the pervasive nature of discrete optimization as their primary goal in producing this book. There are no doubts that they have achieved this goal." (Antanas Zilinskas, Interfaces, Vol. 38 (2), 2008)