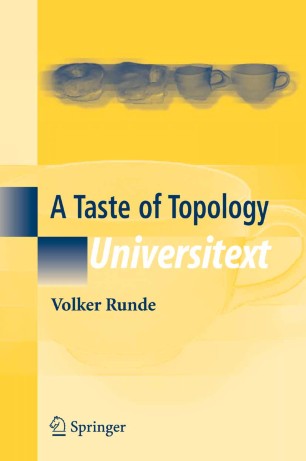 A Taste of Topology

If mathematics is a language, then taking a topology course at the undergraduate level is cramming vocabulary and memorizing irregular verbs: a necessary, but not always exciting exercise one has to go through before one can read great works of literature in the original language.

The present book grew out of notes for an introductory topology course at the University of Alberta. It provides a concise introduction to set-theoretic topology (and to a tiny little bit of algebraic topology). It is accessible to undergraduates from the second year on, but even beginning graduate students can benefit from some parts.

Great care has been devoted to the selection of examples that are not self-serving, but already accessible for students who have a background in calculus and elementary algebra, but not necessarily in real or complex analysis.

In some points, the book treats its material differently than other texts on the subject:

* Nets are used extensively, in particular for an intuitive proof of  Tychonoff's theorem;

* A short and elegant, but little known proof for the Stone-Weierstrass theorem is given.