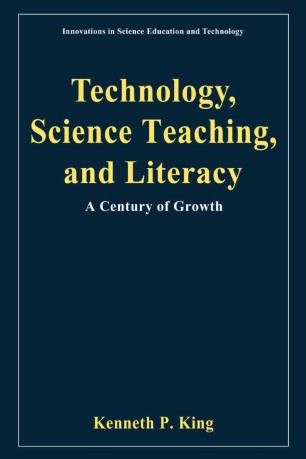 A Century of Growth

Part of the Innovations in Science Education and Technology book series (ISET, volume 11)

This book deals with the use of technology in science teaching. The author is not, nor has ever had an intention of being a “techie. ” Rather, I spent the first decade of my professional life as a high school physics teacher, making occasional uses of technology to further student understanding and to automate my own teaching practices. During my graduate work, my interest in the use of technology continued. Catalyzed, to some extent by the increasing availability of graphical interfaces for computers, the realization struck that the computer was more and more becoming a tool that all teachers could use to support their teaching practice—not simply those with a passion for the technology itself. The rapid changes in the hardware and software available, however, frequently caused me to reflect on the usefulness of technology—if it were to change at such a rapid pace, would anyone, save for those who diligently focused on the development of these tools, be able to effectively use technology in science teaching? Was change to rapid to yield a useful tool for teachers? To address this interest, I examined the nature of science teaching during this century—using the equally fluid notion of “scientific literacy”—which formed the organizing principle for this study. The result is a examination of how technology was used to accomplishing this goal of producing scientifically literate citizens. What was observed is that technology, indeed, consistently came to the service of teachers as they attempted to achieve this goal.